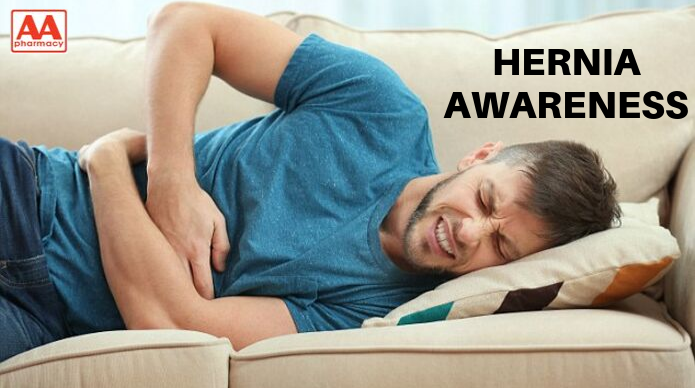 Hernia occurs when an organ pushes through an opening in the muscle or tissue that holds it in place. Hernia is the condition when an abnormal exit of tissue or an organ, such as the intestine, through the wall of the cavity.

Inguinal hernia is the common type of hernias. In men, the inguinal canal is where the testes descend before birth. The canal contains the spermatic cord and blood vessels. When an inguinal hernia occurs, part of the intestine protrudes down the canal and into the scrotum. Inguinal hernia is more common in men than women because the canal is bigger.

A hiatal hernia occurs when the upper part of the stomach protrudes through the diaphragm, a hole usually occupied by the esophagus. There are two main types of hiatal hernia:

An incisional hernia is a type of hernia caused by an incompletely-healed surgical wound. Since median incisions in the abdomen are frequent for abdominal exploratory surgery, ventral incisional hernias are often also classified as ventral hernias due to their location.

Epigastric hernias are protrusions of fat or sometimes intestine through the abdominal wall between the navel and the breastbone.

This type of hernia occurs when scar tissue weakens the abdominal wall such as following a surgical operation or following trauma.

An obturator hernia occurs when part of the intestine passes through the gap between the bones of the front of the pelvis.

What are the symptoms of Hernia?

The most common symptom of a hernia is a bulge or lump in the affected area. In the case of an inguinal hernia, you may notice a lump on either side of pubic bone where groin and thigh meet. For hernia on infants, you only be able to feel the bulge when the baby crying. A bulge is typically the only symptom of an umbilical hernia.

However, there is a case where hernia have no symptoms. Some may not know that they have hernia unless it shows up during a routine physical or a medical exam for an unrelated problem.

How to prevent Hernia?

There is no way to prevent the muscle weakness that allows hernia to occur. However, it can reduce the amount of strain place on your body. This may help to avoid hernia or keep an existing hernia from getting worse. Prevention tips include: