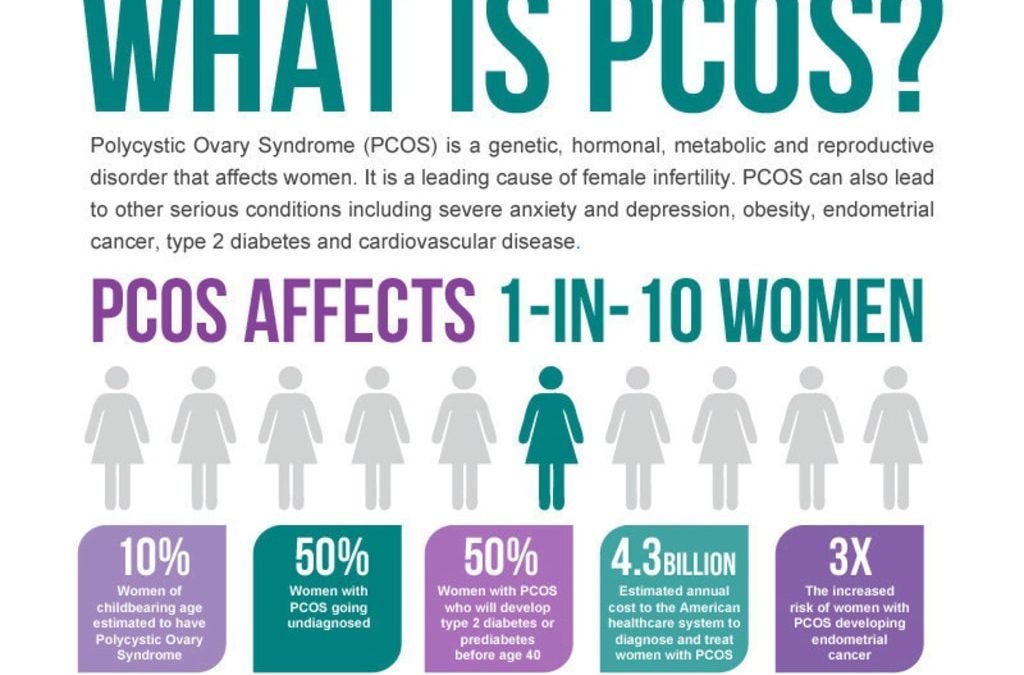 Polycystic ovary syndrome (PCOS) is a health issue that affects one in 10 women of childbearing age. Women with PCOS have a hormonal imbalance and metabolism problems that may affect their overall health and appearance. Polycystic ovaries are slightly larger than normal ovaries and have twice the number of follicles (fluid-filled spaces within the ovary that release the eggs when there is ovulation).

Signs and symptoms of PCOS include

High levels of androgens. Higher than normal androgen levels in women can prevent ovulation during each menstrual cycle, and can cause extra hair growth and acne.

Diagnosis of PCOS in women based on at least two of these three symptoms:

High androgen levels in women is most often diagnosed through the presence of hirsutism. Other indicators such as acne and alopecia. The second test to diagnose this symptom is to measure circulating androgen levels. Measurements of serum total testosterone (T) and sex hormone binding protein (SHBG) are often the markers for these tests. Ultrasound exam can confirm the diagnosis as the ovaries may be 1½ to 3 times larger than normal in women who have PCOS.

Insulin resistance can be found in 60-80% of all women with PCOS and in 95% of obese women with PCOS.  there is also an increased prevalence of impaired glucose tolerance (IGT), gestational diabetes (GDM), as well as type 2 diabetes.

Infertility is a common complication of PCOS. Ovulation may not occur due to an increase in testosterone production or because follicles on the ovaries do not mature. Even if ovulation occurs, an imbalance in hormones may prevent the lining of the uterus from developing properly to allow for implantation of the mature egg.

Combined oral contraceptive pills (OCPs) are the first line of treatment for women with PCOS not seeking pregnancy. OCPs can regulate the menstrual cycle and reduce androgen production as well as its corresponding physical manifestations, such as hirsutism and acne. OCPs have also been shown to reduce the risk of endometrial cancer.

Metformin is a commonly used drug in the biguanide class for treatment of type 2 diabetes. It has been used in the treatment of metabolic syndrome in PCOS as it can help regulate hyperinsulinemia, reduce the level of androgens, and control the menstrual cycle of women with PCOS.

A healthy lifestyle will help control associated health conditions such as obesity, cardiovascular disease, and infertility.

Laser-hair removal is also a common means of controlling hirsutism among PCOS patients.

Alpha-Lipoic Acid is a free radical scavenger and a regulatory agent of body weight. Studies have shown that alpha lipoic acid can help in regulating menstrual cycles, decreased number of ovarian cysts, and increased progesterone levels.

Chromium is an essential mineral that has an essential role in carbohydrate and lipid metabolism. Supplementation of chromium in women with PCOS showed improved glucose tolerance.

L-carnitine provides transport of fatty acids and regulation of energy production, which have a central role in promoting oocyte maturation as immature oocytes can be a source of metabolic and endocrine malfunctions in PCOS.